Obamagate. What is it?

Well if you are reading this I'm guessing you dont know. Where have you been! ? 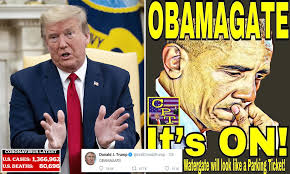 So here it is. Obamagate is essentially trumpgate. But renamed to make you believe that somehow when Obama was in office he did some incredibly awful things that have affected Donald Trump.
However what has really happened here is Donald Trump, the guys who accuses everyone who dares questioning him of spreading fake news, is actually spreading fake news himself.

He is deflecting away from the fact that as the president of the United States, he is doing an atrocious jobs of dealing with covid-19.

Instead he has created a new obamagate without actually telling us anything about it other than we should all already know what a terrible thing it is.

News sources have tried to get answers from him in regards to obamagate without success. Trump just dribbles out some gibberish and thinks that we will all know what he is talking about.

The fact is, Trump very rarely says anything that makes much sense.

So here I am declaring this as Trumpgate. As Donald Trump has said and done some terrible things. Example number 1 - suggesting we inject ourselves with disinfectant.

The proof is all there.