Trump will inject himself with disinfectant to prove he is right

April 24, 2020
Staff
Trump will in fact inject himself with disinfectant to prove that the words he speaks, cause Trump knows words and has a really, really big brain. 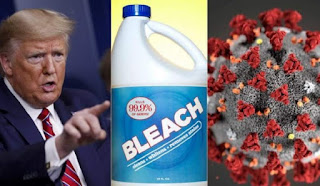 After he has done that all the trumpets who still believe that America has a great president will follow suit.

They will all die. The Corona virus will end

Mother earth and God made their point.

The rest of the world are laughing at America right now. The corona virus pandemic is like a film, but watching Trump and the insane protests over there... Get the popcorn out and watch America. Its a whole show in itself.

Trump is mentally unstable. What president says things like this to a country where some people believe everything that spews out if his mouth.

The alternative to him being mentally unstable is that he doesn't want to be president any more. If people still vote for him after this... It proves that America isn't great at all.

A country that has the freedom to vote who they want, voted Trump in. Anyone who is saying he is doing a good job right now... They need to sit and really think about their beliefs.

There is a lot of really bizarre and unbelievable events happening in the world right now, China covering things up, oil being a negative price, the whole world in lock down. Yet its Donald Trump who stands out as the most unbelievable with telling people to inject themselves with disinfectant.

Please people of America... Tell me you will not be voting for this idiotic moron again. He desperately needs sectioning.