Is Trumpism a mental disorder?

Before you rip my head off... I know, some of you have already tagged me with a number of rather offensive labels already; Never Trumper, Traitor, and committer of espionage probably lead the pack, followed by any number of four letter words, insinuations about my parentage, and attempts to book travel plans for me to all sorts of third world countries. 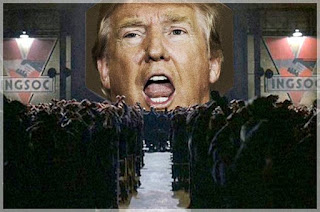 By which you have ironically already proved my point.  Keep in mind, I an NOT referring to all supporters of our President.  One point I continuously try to make is that we ALL have the right to our own opinion and political beliefs.  The United States has evolved what is essentially a two party system, and for many years, it worked well.  It worked because we all seemed to understand that when two opposing points of view get together and compromise, a comfortable medium tends to be found.

For example; I am a firm believer in the right to bear arms.  I know many people who strongly disagree with my beliefs.  I have one friend in particular who is a strong proponent of virtually every anti gun law you can imagine.  I understand his perspective;  5 years ago his son was shot while away in college. (He did live).

I empathize with him.  I understand where his beliefs come from.  I also disagree with them.  The other day he and I had a debate about the Texas church shooting that just happened.  I think it's a damn good thing the folks present were carrying.   He feels like if there were no guns they wouldn't have needed theirs.  We go around and around.

His opinion doesn't make him a bad person.  Nor does mine.  He is a hell of a guy, one I've been friends with for years.  And I plan to remain so.  But we are the minority now.  The amount of pure hatred you see today over politics is a tragedy.   Every single thing I've written that does anything but paint Donald Trump as the high exalted mighty one earns me comments that are absolutely brutal.

It's a rather disturbing pattern.  The people I'm referring to are not any kind of majority, but they are a large and vocal minority.  In the eyes of these folks, Donald Trump can do no wrong.

I'll give you an example.  I wrote a bit called "Are you unpatriotic if you don't support Donald Trump?"  It's a valid question.  I eventually had to disable the comments on that one;  the comments were otherworldly.  One individually graphically explained that he wished to dismember my children because I was such a horrible traitor.  I mean.... holy shit, people.

Mr. Trump certainly believes this to be true.  (Not the part about dismembering children)  If you disagree or oppose him, you are a "Never Trumper."  "Human scum" is another of his favorites.  How is this ok?  Stop for one moment and consider that statement.  If you disagree with the Donald Trump you are scum and a traitor.  Why?  Because he's the president?

Here is my question to any one who believes this.  If questioning Donald Trump is unpatriotic and wrong because he is President... Then does that mean every one of them who disagreed with Barack Obama was also a traitor?  Because it's a safe bet the majority of those who worship at the temple of our Lord and Savior Donald Trump were vocal opponents of Obama.  By your logic.... Hannity?  Traitor.  Judge Jeanine?  Traitor.  Or is this just a conservative privilege?  Does it only apply if the President in question agrees with you?  Because after that article I can assure you... there are alot of people out here who actually believe that to be the truth.  What if Obama had run around screaming that you were all unpatriotic Never Obama-ers?  You'd have screamed for his head.... or accused him of having been born in Africa.

And how is it that Trump NEVER does anything wrong?  Do we all remember screaming along to his mantra?  Who's gonna pay for our wall?  Mexico!  Where exactly is that check?  For that matter, where is the big glorious wall?  Here are facts, people.  We elected a con man.  A reality show star.  He didn't care about the stupid wall.  It was a campaign slogan meant to rile us up and get us excited.  And it worked.  He rode that wall right into office.  But now... you hear those crickets?  They're on the Mexican side of the border.  Easy to hear, because there's no wall there.  Although they may get drowned out by the sound of the folks in Mexico laughing at the notion of paying for said wall.  Why are none of you upset by this?

Oh I know... because you're still reveling in the glow of his super amazing wondrous save the world Tax cut!  The one he promised all of us middle class fools was for our benefit.  But I dare one person making less than 6 figures to show me how this amazing new tax cut helped you.  And don't play me a clip of anyone on Fox News extolling it's virtues.  They're all loaded, so of  course they love it!  No one in the middle class was helped by this.  So again... why are you all not mad?

It has reached the point of insanity.  The man has literally launched a campaign to force a foreign country to provide dirt on the guy running against him.  This whole Ukraine deal has brought to the front just how blindly people follow Trump now.  I swear if I hear one more person tell me that the Biden saga is just Trump fighting corruption, I will lose my damn mind.  To ignore the facts here borders on imbecilic.

Yet those of you in his flock of die hard believers ignore the obvious.  You make excuses.  I won't bother with the litany of other examples;  you will simple make excuses.  Blame others.  Nothing is ever his fault.  He makes no mistakes.  I feel sometimes like a third of our country is, in short, a cult.

My question is... why?  How, in just three short years, have we sunk to this level?  Have none of you ever read 1984?  We have all been sucked into an Orwellian nightmare.  It's all here, right down to the double speak.  We have an entire party running around spewing Russian talking points.  Terrified of contradicting the high king because it would be political suicide.

At some point we all have to wake up.  I don't know how we ended up here.  I don't know how we became, so quickly, a nation of sheep.  The man just launched in inane war.  He's telling us how much safer we all are, yet look around.  The entire world is literally sitting on the edge of their seats waiting to see how much American Blood Iran is about to spill.  We just had to literally send every unit of emergency troops over there to brace for impact.  This is safer?  Soleimani is, indeed, dead.  And already replaced with an equally blood thirsty monster with an identical agenda who now has a holy war for an excuse and a country full of supporters screaming "Death to America!"  How in the hell is this safer?  But there you guys are, screaming Trumps talking points, believing that they are the word because Trump says it is so.

How have we lost our way so drastically so fast?  I voted for Trump.  And I wish more than anything I hadn't, because I am now watching him lead us into oblivion.  The man I once believed to be our saving grace is anything but a Savior.  I pray that we rise up.  That the intellect, pride, and belief in what America stand for lead us from this dark time.   That rationality finds its way back.  Or the America so many have died and fought and lived to build will just be a story in a book for our kids.