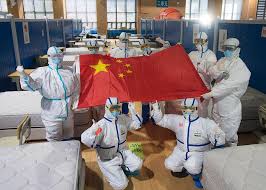 Yes, you read that correctly.  In a world where, as our President has pointed out, sensationalism is running rampant, where as much as 70% of even real news is presented in click bait fashion, that title is actually frighteningly accurate.

But.... China is lying.  It's not hard to find proof.  While they have been telling the world they have no new reported cases, their medical personnel are taking to social media (and risking their lives to do so) to keep the truth out there.... the COVID-19 virus is not slowing down at all there.

As they announced today that they will be lifting their National quarantine the first week of April, perhaps the most terrifying number of our lifetimes has leaked out; a number that because of technology, the Chinese could not brush under the carpet.

In the last 3 months, more than 21 million cell phone accounts have closed.  To understand the gravity of this number, one needs to understand that the Chinese society is far more fundamentally dependent on their cell phones than any other in the world.  Their entire lives run through their phones;  the communist regime not only insists upon it, they provide it. The whole basis of their supposed COVID-19 response began with cell phones; they assigned people a color... based on their COVID-19 status.  This information is stored in an app on their phone; one which even police have access to.  People in China do not pay for their phone service;  it is provided for them.  Short of dying, there is simply no way the authorities there would even allow people to terminate their service.  And with a country of more than a billion people having been locked down in their homes for this entire calendar year, it is unfathomable that millions would simply just choose to turn their service off.... even if they could.

The simple truth is that the number of cases and deaths is exponentially more than the Communist Chinese Regime is sharing with the world.  And these lies threaten us all on a world wide basis.

You have to wonder.... if China is lying about  all of this... what in God's name else are they lying to us about?